The best examples of marketing mistakes

It is the truest of truisms that mistakes happen, no matter how vigilantly you guard against them.

Being less than perfect beings, we make mistakes, and as marketers, many of our mistakes end up in the public sphere *gulp*. One of the biggest challenges for a central marketing team is ensuring they allow enough time for a second set of eyes on their plan or their work.

First cab off the rank is the mistake from March 2018 when ASOS (the behemoth fashion e-tailer) printed 17,000 bags with a spelling mistake. Certainly not the end of the world, but it could have been quite embarrassing. 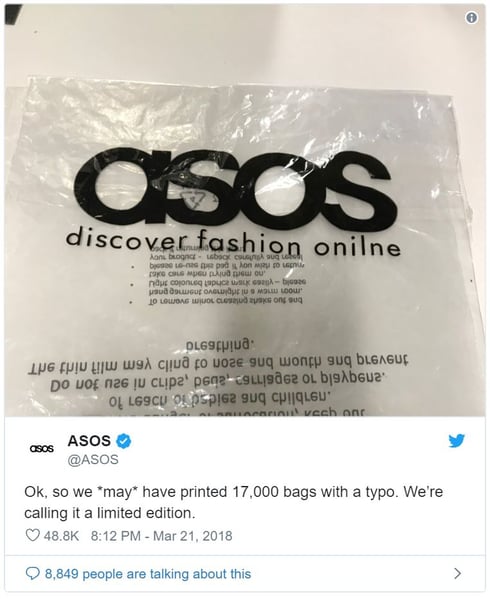 Rather than ditch the bags (bad for the environment) or hope the mistake wasn't noticed (unlikely), they owned the mistake and it became a point of connection for the brand with their fans.

Mainstream media picked up on their ownership, and it generated dozens of stories, creating positive sentiment around the brand.

Not bad for a typo!

In 2010 GAP decided it needed to connect with a new audience and launched a re-brand. The public backlash was fast and fierce, and GAP wound the new logo back within two days. Two days!

Re-brands aren't automatically a bad thing - there will always be someone who dislikes what you have done - but they need to be a considered response to something in your market, and informed by your customers and their emotional connection to your brand promise, rather than a gut feeling from some within the marketing and executive teams.

GAP makes the 'best examples' list because they were prepared to listen to customers, even if they hadn't done so during the entire brand development phase. Better late than never.

Twitter hashtags can be a dicey proposition for brands, particularly if the social media manager latches on to a 'trending' hashtag without understanding the context.

DiGiorno Pizza walked into this minefield in 2014 with a tweet related to #WhyIStayed. 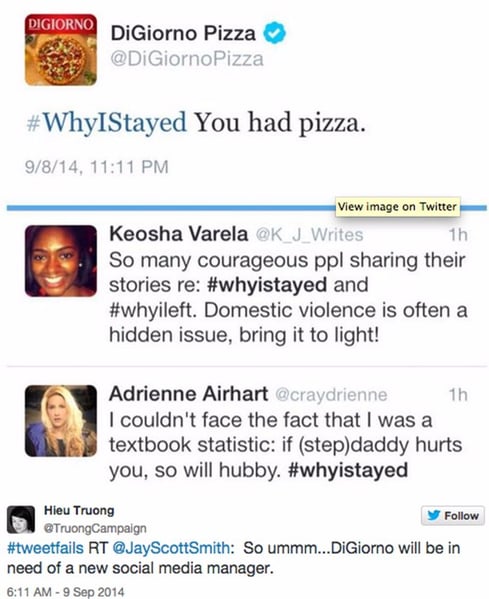 This hashtag, along with #WhyILeft, was introduced to highlight domestic violence, with abuse victims and survivors sharing their stories.

DiGiorno, of course, issued an apology on Twitter and then sent tweets apologising personally to each person who had @ them. It was the least they could do for misusing such a sensitive hashtag. It was also more than most companies do in a similar situation, issuing a single apology, often not even particularly genuine.

These mistakes are all avoidable (it's called checking, Ed), but it is how you treat them and how authentic you are in your approach that will determine the brand damage inflicted.

How Outfit Enables Sales and Marketing to Play Nice Together